One of the fundamental goals in neuroscience research, is to understand how the brain integrates the multitude of sensory cues from a constantly changing environment to generate appropriate behavioral responses and ultimately form memory. Our lab aims to investigate these processes in the context of social behaviors.

A social behavior consists of a set of interactions among conspecifics, ranging from simple animal aggregations, sexual partners engaging in courtship and/or parental behavior, to rivals fighting over territory and mates. These naturally complex social behaviors, are composed of innate and learned components that are shaped by evolutionary processes which influence animal reproductive fitness. Aggressive behavior is used throughout the animal kingdom to compete for resources, access to mates, defend a territory and to protect oneself and the family. The success of such aggressive interactions relies on using the best fighting strategy, which is build by prior experiences and by gathering information about opponents’ strength. Phenomena called "winner and loser effects" - individuals with previous wins become more likely to win again, while a loss lowers an individual’s chances for future wins - have been reported in a large number of animal species, including humans.  They participate to the stabilization of social hierarchies among conspecifics, and have been postulated to modulate males' reproductive fitness by either affecting the animals' physiology and/or the females' receptivity.

Drosophila melanogaster as a model system 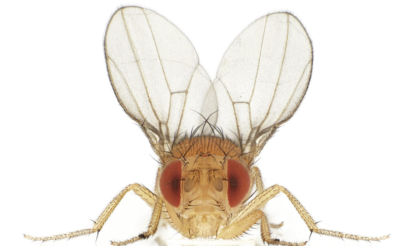 To tackle these questions, our lab use the fruit flies Drosophila melanogaster as a model system.  Drosophila represents a valuable genetic model system, and its use has shed light into many biological processes of medical interest, such as aging, memory, sleep deprivation, and drug abuse. It offers nearly unlimited genetic tractability and has a simple brain compared to vertebrate model systems, with 1.000-10.000 times less neurons. Moreover, it has emerged as an important model to investigate the neural and molecular mechanisms underlying aggression.

In competition for food, mates and territory, male flies employ a series of stereotypical behavioral patterns. This starts with the opponents approaching each other. One animal display visual threats before engaging in physical contests with the use of lunges. As fight progresses, both flies modify their fighting strategy: one chases and lunges at its opponent and shows territorial behaviors, while the other retreats from the resources to avoid new confrontations. This results in formation of dominance relationship with dominant and subordinate animals.

Although an innate behavior, aggression is also highly adaptive. We showed that learning and memory play critical roles in modulating aggressiveness. Following single fighting bouts, both dominant and submissive flies present “winner and loser internal states” that result in formation of short-term memories. These decay over several hours, with the temporal dynamic dependent on the level of familiarity of the opponents. Experiencing repeated defeats induce long-lasting behavioral consequences and formation of long-term losing memory that requires protein synthesis. Experiencing repeated victories do not lead to such long-term winner effect. These losing and winning memories are observed in almost all animal species including humans and likely reflect adaptive and evolutionary mechanisms, potentially by influencing animals’ reproductive fitness.

Techniques used in the lab