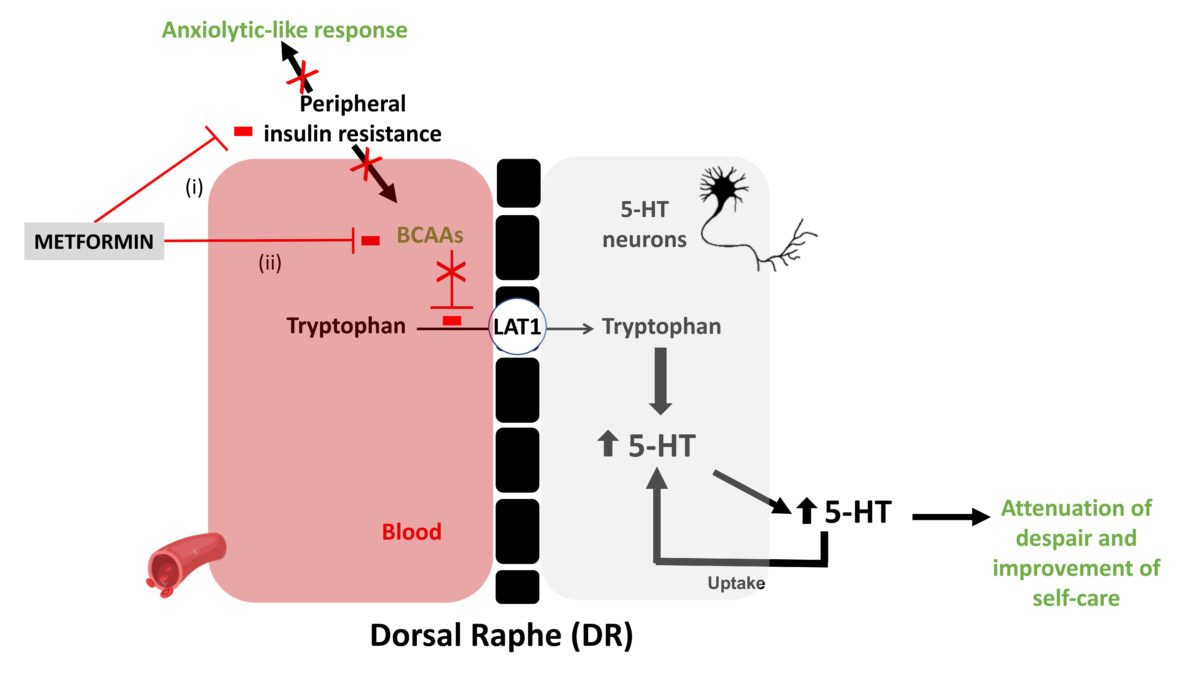 Depression is a major public health concern and one of the priorities in the field of psychiatry, notably to develop therapeutic strategies with a better efficacy than currently available antidepressant drugs.

A recent study led by Bruno GUIARD, professor at the University of Toulouse III, Paul Sabatier (Research Center On Animal Cognition / Center of Integrative Biology), provides experimental evidence that metformin, an oral anti diabetic, produces anxiolytic and antidepressant-like effects in insulin-resistant mice. This finding is particularly interesting in light of the therapeutic limitations of antidepressant drugs and pave the way to the identification of new targets for the treatment of psychiatric disorders in relation with the peripheral metabolism.

This finding is particularly interesting in light of the therapeutic limitations of antidepressant drugs and pave the way to the identification of new targets for the treatment of psychiatric disorders in relation with the peripheral metabolism. This study has been published recently in Journal of Neuroscience (J Neurosci. 2019 Jun 3. pii: 2904-18. doi:10.1523/JNEUROSCI.2904-18.2019). 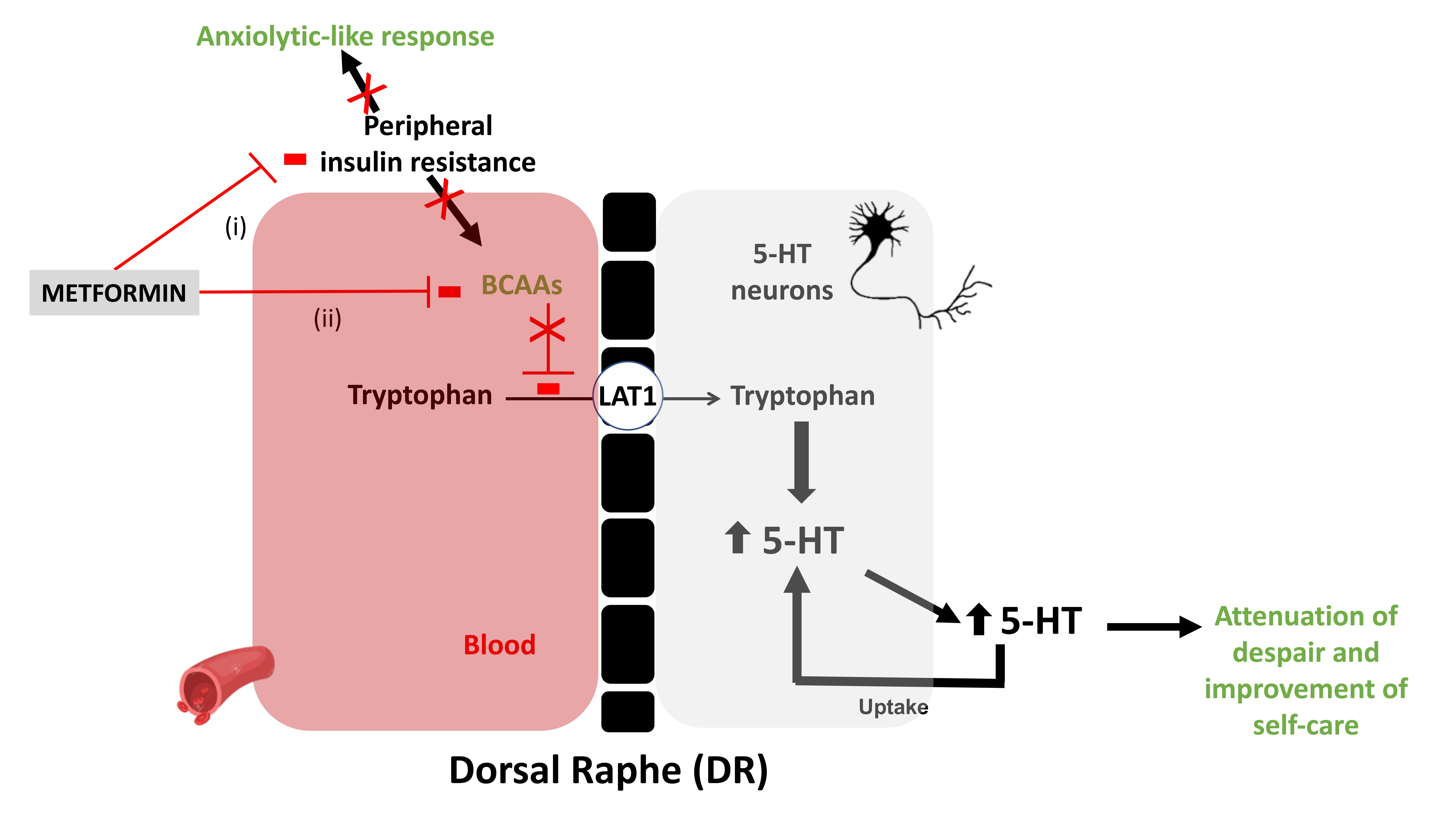 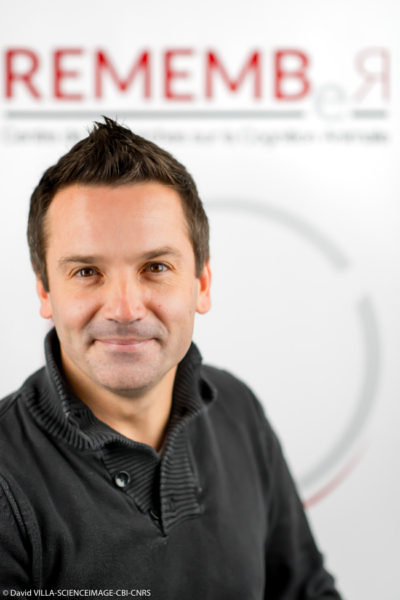 Physarum polycephalum is a complex single-cell organism that has no nervous system. It can learn and transfer its knowledge to its fellow slime moulds via fusion. How it did so was a mystery. Researchers at the Centre de Recherches sur la Cognition Animale (CNRS/UT3 Paul Sabatier)1 have recently demonstrated that slime moulds learn to tolerate a substance by absorbing it.

This discovery stems from an observation: slime moulds only exchange information when their venous networks fuse. In that case, does knowledge circulate through these veins? Is it the substance that the slime mould gets used to that supports its memory?

Memory inception and preservation in slime moulds : the quest for a common mechanism.

Philosophical Transactions of the Royal Society B le 22 avril 2019. 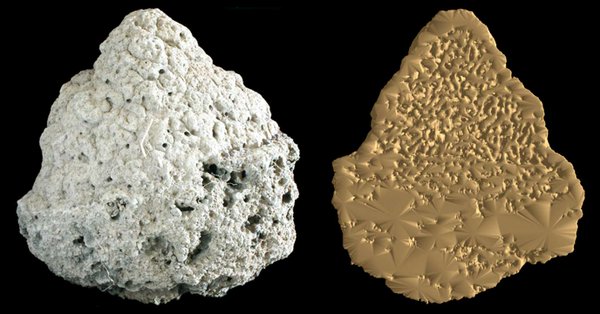 This study, published in the journal Science Advances, showed that termites build outer walls that contain both small and percolating large pores at the microscale and these microstructures play a fundamental role in the properties of termites. The architectural design of smart ventilation and drainage systems in termite nests. 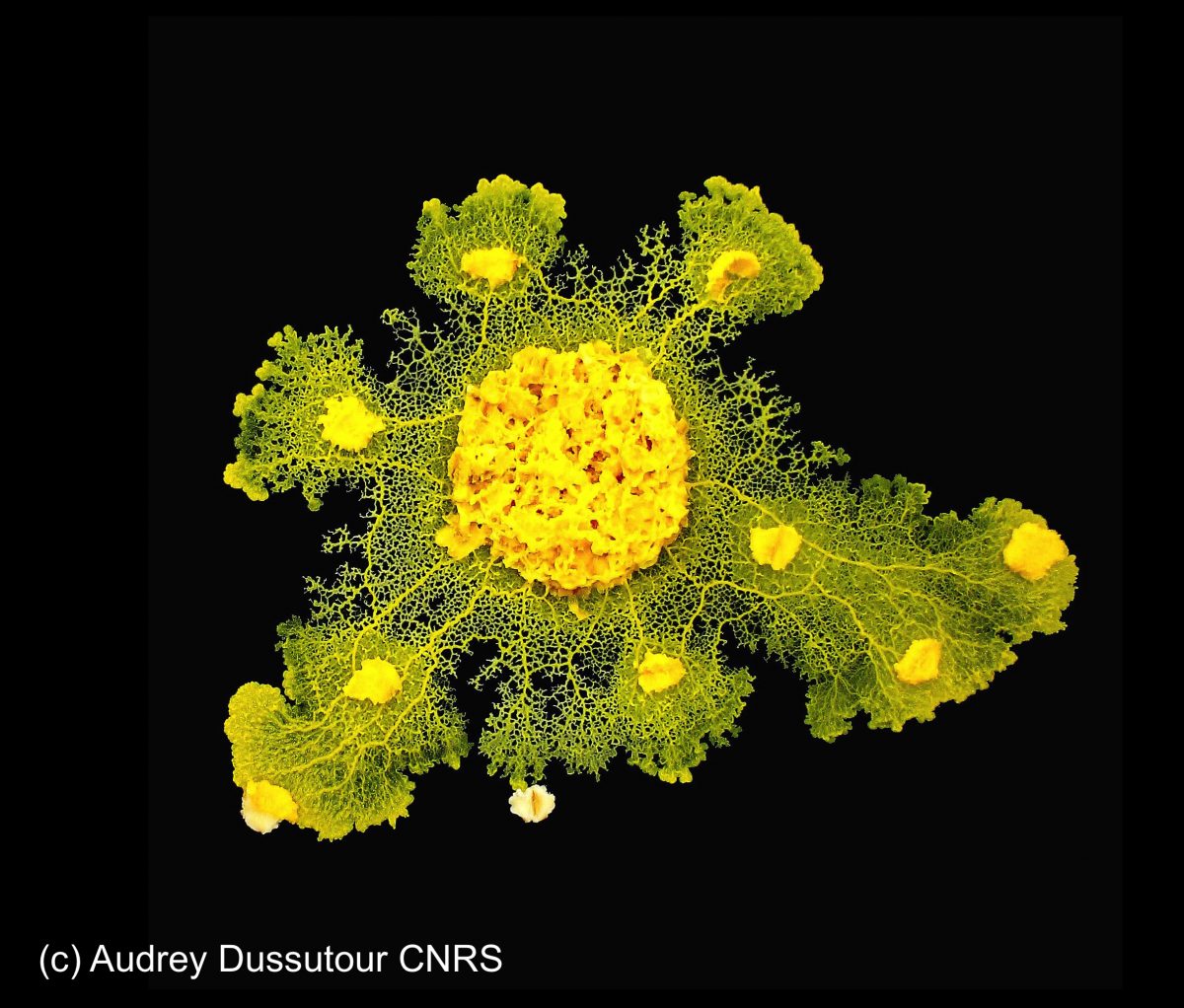 When it comes to choice, taking time to evaluate the different options exposes you to competition, while responding quickly leads to mistakes.

In an article published in Proceedings of the Royal Society of London B, Audrey Dussutour (CRCA-CBI Toulouse) and researchers from the Uppsala university (Sweden) demonstrated that even among unicellulars, there is a wide variety of behaviour in the ability to make good decisions. 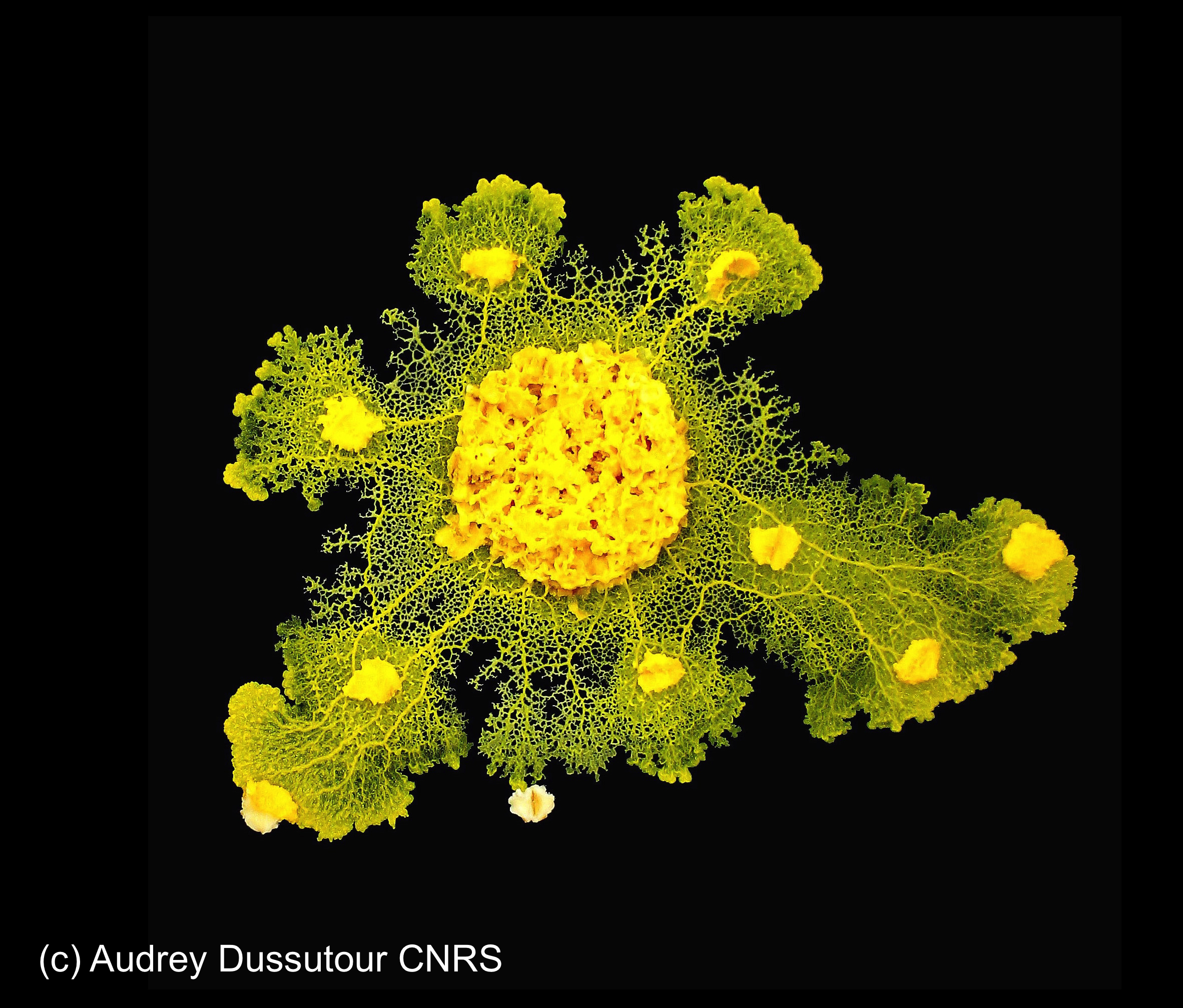 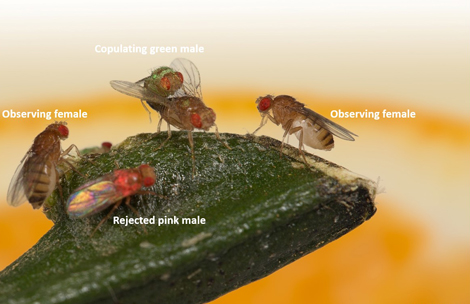 The study, published on November 30, 2018 in Science, provides the first experimental toolbox for studying the existence of animal cultures, thereby opening up an entire field of research.

While the cultural process is often thought of as being the unique to humans, the existence of persistent behavioral variation that cannot be ascribed to genetic or ecological variation in primate or bird strongly suggests the possible existence of cultural transmission within certain vertebrate species. For the first time, researchers from the Évolution et diversité biologique (CNRS/UT3/IRD) laboratory of the Centre de Recherches sur la Cognition Animale (CNRS/UT3), along with their international collaborators, have demonstrated that all of the mechanisms required for cultural transmission actually exist in the fruit fly.

Drosophila, commonly called fruit flies, are known for their capacity to learn and copy the sexual preferences of their conspecifics after observing them copulating. Can this transmission, however, be considered as “cultural”? 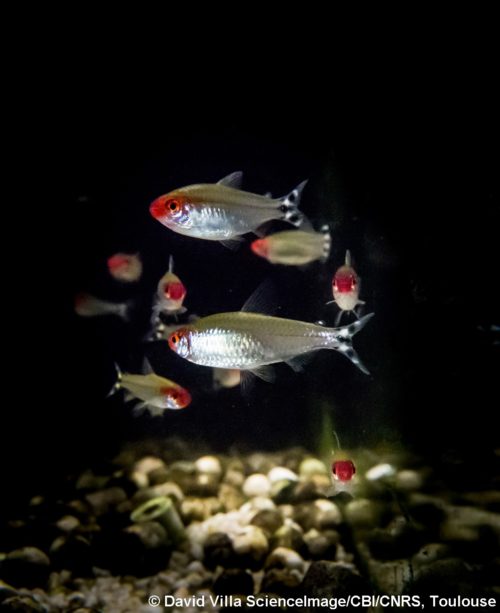 The researchers studied and modelled the propagation of information in schools of fish when they collectively change the direction of their movement.

The results, published on 25 April 2018 in the Proceedings of the Royal Society B, show that each fish mimics the behaviour of a small number of its neighbours and that this mechanism spreads from one person to another in the manner of a domino effect.

Collective movements of groups of animals are one of the most spectacular phenomena observed in nature, but the rigorous analysis of these phenomena is very recent and has only been made possible by technological advances in data acquisition and processing. These collective movements result from local interactions between individuals and are accompanied by the formation of large-scale spatial and temporal structures. They play a fundamental role in group defense, reproduction, or foraging, improving individuals’ ability to survive. To understand these collective phenomena, it is important to characterize the dynamics of interactions between individuals in a group.

Researchers from the CRCA-CBI in Toulouse, the Normal University in Beijing, and the University of Groningen in the Netherlands have studied a tropical fish species, the red nose (Hemigrammus rhodostomus), whose schooling behaviour is very pronounced.

The zero, which symbolizes nothing, the neutral or the absence, being a relatively recent human construction, these results, published in Science on June 8, 2018, question the symbolic importance of the zero in the history of mathematics.

It had already been shown that some vertebrates mastered complex numerical concepts, such as addition or zero, but nothing had been proven in insects. Since bees can count at least 5, researchers have trained them in the concept of “bigger than” and “smaller than”.